At The Vale Veterinary Group, we see a large variety of cases every day. Although all our cases are treated with equal importance we have decided to tell you the story of one animal who we feel demonstrated exceptional bravery, battled against the odds and whose story captured the hearts of all the staff. 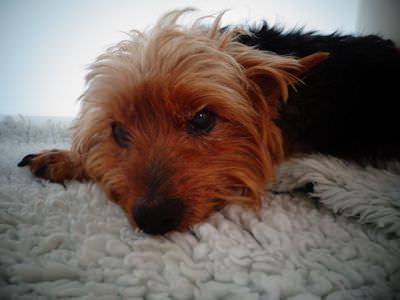 Meet Chipper; Chipper had been away on holiday with his owners when they noticed he had an unusual swelling in his tummy (abdomen). They decided to take Chipper along to a local veterinary practice to get him checked over.

Xrays were taken and these showed that Chipper had a large abdominal tumour, possibly attached to his liver. They decided that they would cut their holiday short and return home so Chipper could be treated as soon as possible.

Chipper was bought in to our Honiton branch to be examined. After ultrasound and repeated abdominal radiographs we confirmed that Chipper had a large abdominal tumour, which needed to be removed.

Chipper was admitted in to our Honiton branch where an intravenous catheter was placed for intravenous fluid therapy and a blood sample was taken to check his liver and kidney function prior to surgery.

A large mass was found attached to his liver and also invading his bowel. The tumour was removed without damaging the liver but 4cm of bowl had to be removed in a procedure called an ‘end to end antastomosis’. This is where a section of the bowl is removed and the two ends re-attached.

Four days post surgery Chipper developed an infection in his wound. The surrounding skin started to die leaving him with a large open wound on his left flank. Chipper stayed with us in our Cullompton branch for 15 days post surgery whilst his wound infection cleared up and his wound re-modelled, he even celebrated his 10th Birthday with us!

We can happily say that Chipper made a full recovery and went home on the 3rd April. One year on Chipper is fit and well and enjoying life.

About the Author: Alan Benson