Jay is a lovely, very inquisitive Labrador who enjoys his walks and tends to try to eat anything he can find when he’s out and about (much like many other Labradors). He came to us with some vomiting and abdominal pain. He was very tender on his abdomen and had a temperature. At this time, we could not feel anything obvious obstructing his bowels. He was given an anti-emetic (anti-vomiting) injection and some antacids as it was thought he had eaten something which had upset his stomach. 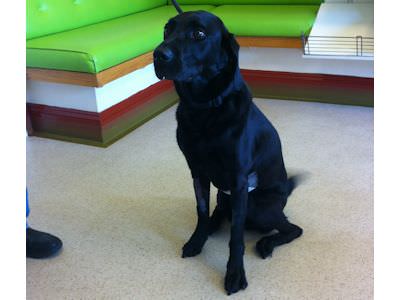 Jay came back to see us two days later feeling much more poorly. He would not eat and was vomiting a lot. He was no longer passing any faeces. We took some X-rays which did not reveal an obvious cause and so he was hospitalised for symptomatic treatment. The next day he was no better and so the X-rays were repeated. In these we were suspicious of a blockage in his stomach and so after discussion with his mum and dad we took him to surgery.

When anaesthetised, we relieved a large amount of fluid from Jay’s stomach and found a large clump comprised of wood, grass and debris, which he had managed to sneak on his walks, blocking the outflow of the stomach. We removed this and checked the rest of his intestines. More grass, pieces of wood and debris had formed together in a rope-like fashion and had become stuck in the small intestines, causing them to bunch up in a concertina and become discoloured. We had to remove over 1 metre of small intestine before stitching him up.

Jay remained in the clinic with us for six days after surgery on intravenous fluids, antibiotics and pain relief. He quickly became a favourite with the nurses and loved his daily visits from his mum and dad. We were delighted to send him home but sad to see him go. He returned five days later to have his skin staples removed and bounded in to see us apparently happy to be back!

Six months on Jay is enjoying a happy normal life at home but is now only allowed to go on walks wearing a muzzle so he doesn’t repeat his naughty habits!

About the Author: Louise Turley